Before you get started with microtonal music, you will need two things:

You can skip the instrument setup steps, if you only want to get familiar with microtonal scales. The default instrument in Helio is silly, but it works out of the box with all temperaments with no setup required, and should give you some idea of how things work.

Note: this describes the key mapping on the host side, but you’ll need to set it up on the plugin’s side as well. Unfortunately, can’t help you with that, as it depends on the plugin, but here’s an example.

The page allows you to adjust key mappings manually and preview the mapped keys by clicking on them. The upper limit is set to 2048 keys - this is the maximum number of keys that can fit into 16 MIDI channels. Which would be enough to handle temperaments of size up to 192-EDO: 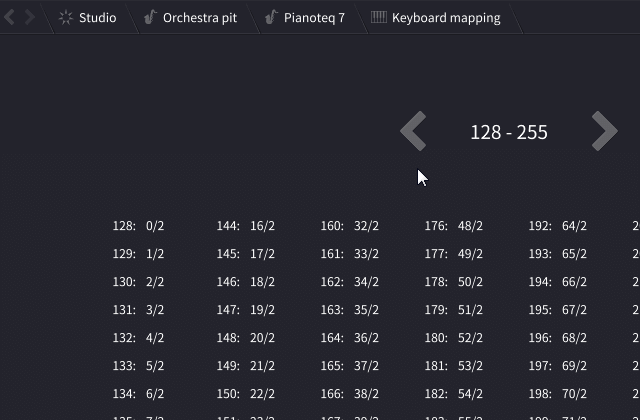 Some additional actions are available via context menu:

While you can set up virtually any custom mapping by hand, there are a couple of (sometimes) more convenient ways, described below.

Note: don’t confuse Scala keyboard mapping (.kbm files) with Scala tuning files. The latter are not of much use for the piano roll, since it doesn’t care about cents and ratios - those are only needed by instruments.

Helio can load Scala keyboard mapping(s), including multichannel mappings which consist of a set of single mapping files with the same name followed by an underscore and a channel number. When you pick a .kbm file, Helio will search for “same_name_*.kbm” files to try to determine whether or not there are multiple channels’ mappings, and try to load them all.

Keep in mind that, on the sequencer side, the mapping will be reversed compared to the same mapping on the instrument side. The piano roll acts like a microtonal keyboard, which needs to overcome the limits of MIDI channels, and thus is mapping all the keys, which are above 127, across multiple channels.

I think that Scala kbm format is obscure and unintuitive, so let me reinvent the wheel one more time and introduce another keyboard mapping format, supposed to be shorter, cleaner and kind of human-readable. You can use it on the keyboard mapping page by simply copying and pasting the mapping as a string.

Let’s start with an example. The entire multi-channel mapping for Pianoteq 31-EDO could be written like this:

Similarly, the 22-EDO Pianoteq mapping would look like this:

For 34-EDO mapping you might want to start one octave lower since the key range is wider:

Everything that differs from the default values is serialized. The serialized mapping is just a string divided by whitespaces into chunks.

If each next key just incrementally moves by 1, the chunk could be shortened like this: base:key/channel,count+.

// TODO more examples (if you have set up keyboard mappings, which work well for some of your instruments, feel free to share them to improve these docs)

The most straightforward way to start playing around with microtonal scales is to convert any of your twelve-tone pieces (or a new project) into other temperament.

All scale-related tools will only show those scales with octave size matched with current temperament (the piano roll doesn’t distinguish EDO’s from non-EDO’s, all that matters is the number of keys in octave, highlighting, key names, etc).

And the built-in scales list only includes 7-tone scales for each of those temperaments, because there are several pieces of the app which still assume working with diatonic scales, e.g. the chord tool or the arpeggiator tool, - so given that limitation, using these tools with any built-in temperament or scale would make at least some kind of sense.

The app makes it possible to play and improvise on a standard 12-tone physical keyboard and record MIDI regardless of what temperament is used. For that, it uses the ‘chromatic mapping’ scale of the current temperament to readjust the incoming MIDI data so that all notes sound like their closest 12-tone equivalents.

Here’s an example of every key of chromatic scale played on a 12-tone MIDI keyboard and recorded in a 19-edo project:

This feature is on by default, but it can be turned off in the audio settings section just below the MIDI device box:

If you’re using a microtonal physical keyboard, make sure to uncheck this box so that the app doesn’t mess up MIDI input.