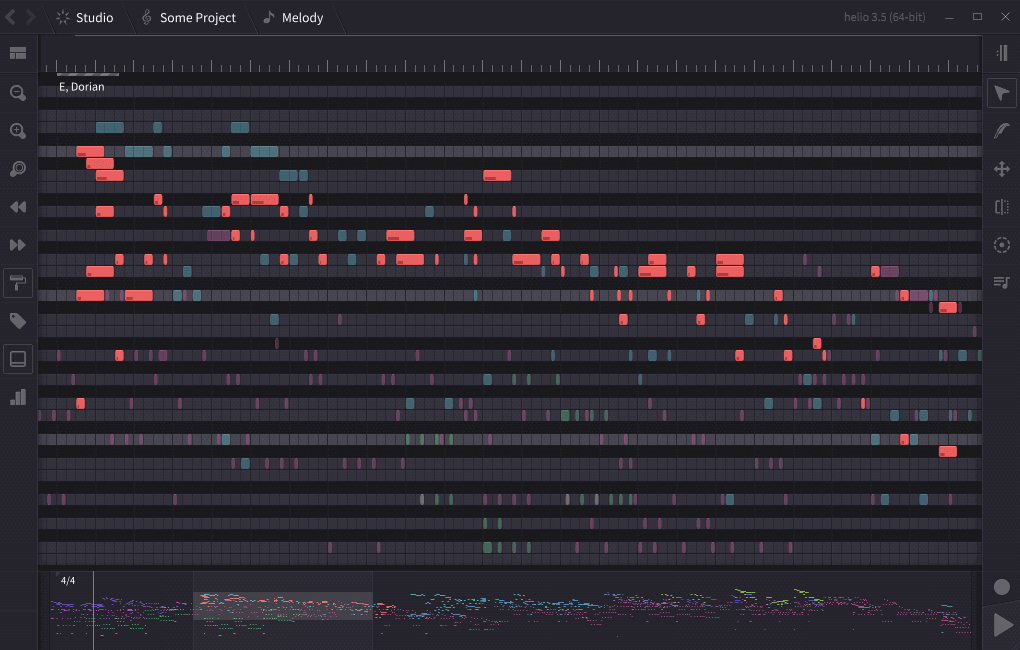 This is what the sequencer page looks like in Helio, as of version 3. There are other pages besides this, but you’ll spend most of the time in the sequencer.

The UI is separated into these parts:

They will be described below, but, before you dive in,

A bit of a history and a couple of silly excuses

This project was started out of the need for an advanced MIDI editor, something like Sublime Text for music.

I was also sick and tired of visual over-stimulation, which most of the music tools out there tend to have more and more (just google some pictures for “digital audio workstation”). As one of the main goals, I wanted a tool that feels right: something with an uncluttered and non-distractive UI.

So generally, I’m always trying to avoid adding UI controls if there’s a way to do without them. As it turned out, though, there are a couple of challenges with that approach (for which I don’t see simple solutions, UX design is hard):

If something feels misleading to you — apologizes, feel free to report that to help identifying the main friction points.

The breadcrumb control on the top is responsible for the navigation over the workspace. 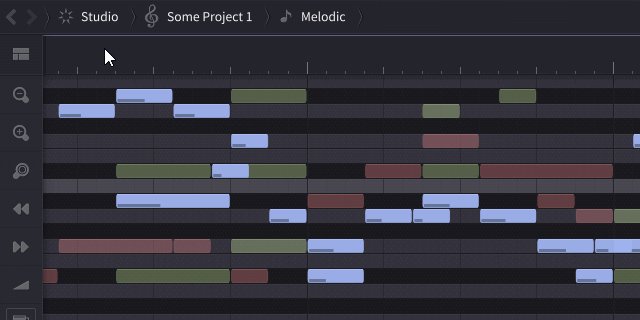 Breadcrumbs are displaying a hierarchy of the current page you’re on.

Under the hood, all pages live in a tree-like structure like this:

Note that all items in the breadcrumb control have their own context menus: 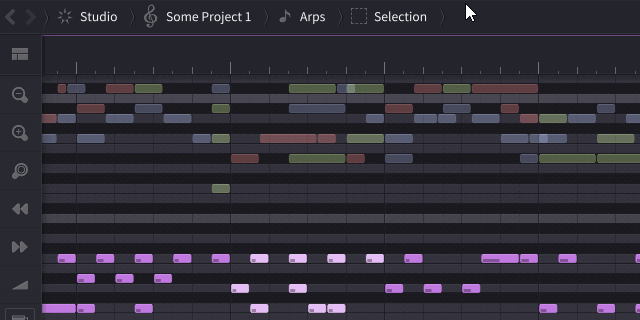 After starting Helio the first time you should have a simple example project already open in the editor. Here’s a couple of steps that can help you to get started:

To start a new project from scratch, navigate to the dashboard by pressing Home key, or clicking the Studio node in the breadcrumbs. There you’ll see the list of recent projects, and a couple of buttons:

There are several ways:

The most notable difference in the instruments management from the majority of DAW’s and sequencers out there is that Helio separates instruments from projects.

Each project only holds the instrument “references” (basically, the hashcodes of the instrument info), so that the instrument settings are not saved in the project file, but rather in the application workspace settings.

Instruments are also created and set up in a separate page, called Orchestra Pit.

The reason for implementing it this way was that in my workflow, I tend to use all the same instruments for all the projects. The app was designed primarily as a sketching and prototyping tool, and I usually have lots of sketches, so all the operations that involve switching between projects, opening and closing them, or checking out in the version control, were ought to be as fast as possible, and not eat up all the memory.

If your setup implies always having different instruments or instrument settings for each project, or if you want the project file to contain the instrument details, Helio will make you suffer.

On the other hand, if you happen to have an instrument library you’re comfortable with (e.g. VSL or some selected soundfonts collection), and you want to set it up once and forget, you’ll probably like this approach. 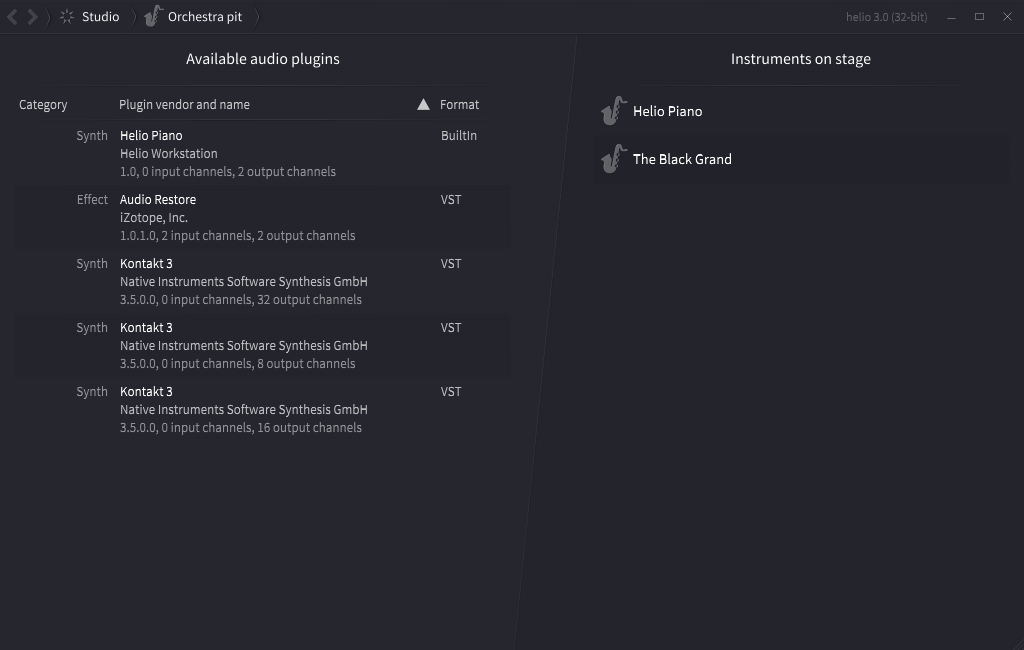 First, you want to scan for available plugins, there are two options in the orchestra pit menu:

Once you have a list of plugins, create an instrument using the plugin menu, so that it appears on the stage and can be assigned to your tracks. 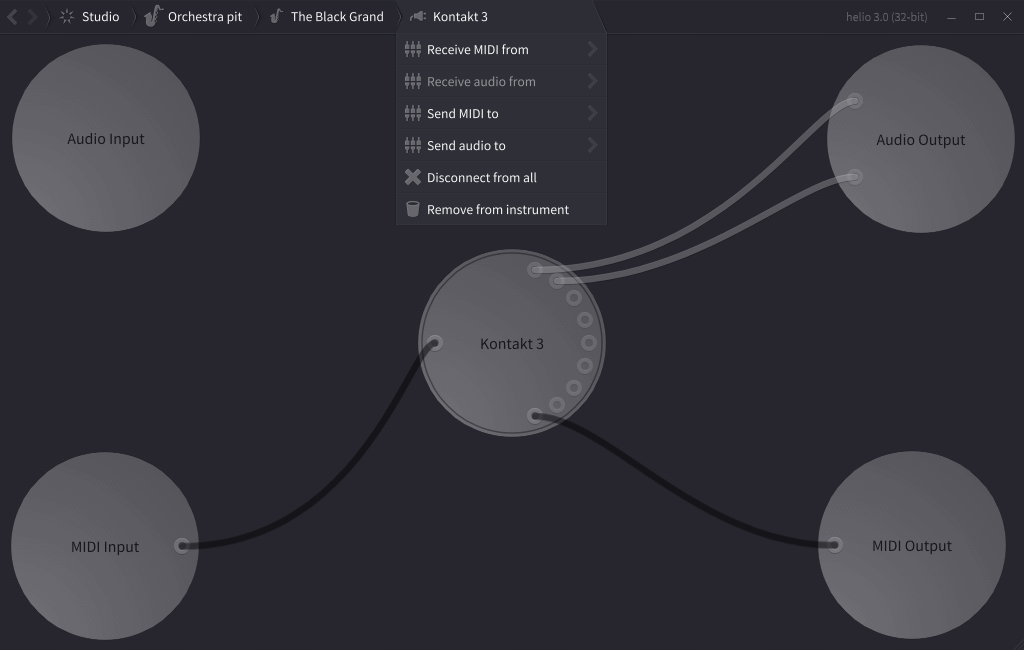 Most of the actions here, including audio and MIDI routing, are available through the menus.

While it is possible to set up a multi-plugin instrument with audio/MIDI routing in Helio, the convenience of the instrument page was not of a particular concern: the development is rather focused on the sequencer functionality. If you are running it under Linux, it might be a good idea to add Carla as an instrument, and use it to manage VST/whatever plugins and routing.

On the top of the editor canvas, there’s a timeline control. To interact with it:

Timeline events include annotations, key signatures and time signatures, and they don’t affect the playback of your piece in any way, they are rather meant to provide a visual cue.

The right-click on the annotation selects all notes of the active track up to the next annotation.

Time signatures simply define the way the vertical grid lines are aligned in the roll:

Key signatures change the way the rows are highlighted in the piano roll, but this effect can be disabled.

Apart from that, arpeggiators and a couple of other tools rely on the key signatures to figure out the current harmonic context.

If you have enabled the playback loop over the selected scope, timeline will display the repeat signs:

This sidebar is responsible for track navigation and UI control.

Most buttons on the sidebars have keyboard shortcuts, which makes then kinda redundant, but they are displayed anyway for the sake of having a consistent UI on mobiles or touch-screen laptops, where you don’t have hotkeys.

This sidebar is responsible for editing tools and playback control:

The piano roll always limits the editable scope to a single track. You will see all other tracks in a semi-transparent ghost mode. Most common interactions with the piano roll canvas are:

Interacting with piano roll also depends on the current edit mode, but the most commonly used modes are the first two:

All notes, when edited, are aligned to the grid, which depends on the zoom level and supports the resolution of up to 1/64 notes.

All edits are undoable; note that the last 10 undo actions are saved in the project and are still available after restarting the app.

All changes are saved automatically: on exit, and on a timeout after the last change.

Add new tracks by duplicating the existing ones (F5), or via project menu, or by cutting tracks with the knife tool in the pattern roll.

The velocity levels editor (toggled by V hotkey) provides a way to visualize and draw gradual increase/decrease in note volume.

As well as the piano roll, the velocity map limits its editable scope to the active track. But in addition, if any notes are selected, the editable scope is limited to the selection, to make it easier to draw more complex ramps for different chunks of the track:

At the moment of writing, only linear ramps are implemented:

You can also change note velocities without this editor, just by middle-button dragging the note components on the roll.

The record button (F12) will try to auto-detect the available and enabled MIDI input device, or provide a choice if there are more than one (the choice is “remembered” and can be changed later in the settings page):

If the recording mode is on, but the playback has not started yet, it will wait until it receives the first MIDI event and start recording & playback.

In the piano roll mode, it always records to the selected track/clip:

In the pattern roll, it either records to the selected track/clip, or, if no piano clip is selected, it adds one, once the actual recording starts.

You don’t necessarily need that editor. Helio was designed to be a hybrid linear-based/pattern-based sequencer, so you could just stay in the piano roll mode and treat your project as one big canvas.

However, the pattern roll is helpful for rearranging experiments:

Pattern roll also allows to tweak some track parameters, like key offset of velocity multiplier. In future, it may shift towards more parametric sequencer features.

The tempo track, as any other automation track, interpolates the controller value between nodes, and those tiny points are displayed at the exact times each new MIDI event is sent.

To interact with it:

Often, you only need one tempo for the whole song - for that, pick “Set one tempo” menu item in the tempo track menu, or project refactoring menu.

The concept of version control comes from the software development world. If you’re not familiar with it, you can think of it as of creating “save points” in your project, and tracking changes made since the last time you saved.

The point of having a version control is lowering the friction of committing changes: any changes can be reset if you don’t like them, any saved revision can be restored later. Helio was started as a prototyping tool, a playground for ideas, where you’d want to have several variations of your sketch — hence the idea of having a built-in version control.

Notable use cases are:

The UI of the versions page is split in two parts: 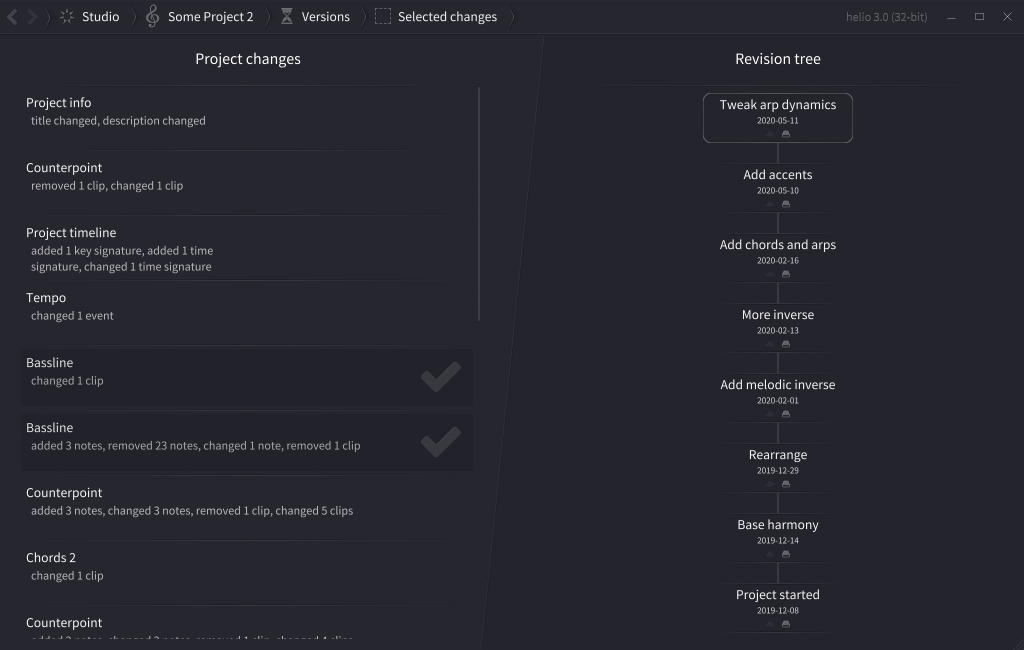 The left side lists all changes in the project, compared to the current revision. Items in the list can be checked and unchecked: both committing and resetting changes are applied selectively.

The right side shows the tree of all revisions that you have saved. Note a couple of icons under each revision: they indicate whether the revision is available locally, or remotely, or both.