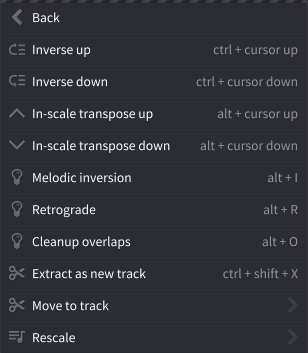 Not listed in the menu, but also handy: Shift + Up and Shift + Down hotkeys transpose the selected notes one octave up or down.

The latter is useful for introducing short-term chord modulations to a “neighboring key” (the key that moves one step either direction on the circle of fifths).

Note that the above hotkeys also work on the pattern roll selection: creating track “instances” and modulating them is one of the easiest way of prototyping the structure of the piece.

Use Control + Up and Control + Down for chord inversion (don’t confuse it with melodic inversion).

Use Alt + Up and Alt + Down hotkeys to transpose the selected notes using in-scale keys only:

The notes which are out of scale will be aligned up or down to the nearest in-scale keys.

Alt + I hotkey applies melodic inversion to selected notes. This contrapuntal derivation is better described on Wikipedia; in short, it “flips” the melodic line upside down.

Retrograde inversion, which is “backwards and upside down”, can be done by simply applying both inversion and retrograde.

Retrograde hotkey also works in the pattern roll, re-ordering all selected clips backwards for each row:

This option simply removes duplicate notes and corrects lengths in a way that notes do not overlap each other.

Pretty self-explanatory shorthand; note that this function is also available in the command palette: hit : and select another track to move the selected notes to (“closest” tracks will be listed first for convenience).

This re-aligns the selected notes into one of the parallel modes of the same tonic.

You can think of it as introducing the in-place modal interchange.

As well as the chord tool, re-scaling assumes that the harmonic context is specified correctly. In the example below, the first section is marked as D Dorian, and all the notes in that section are in the key. Any out-of-scale notes will be left in their places.

Note that this function doesn’t change the key signature. Consider using it for introducing brief or transitory variations to bring more harmonic color.

If you want to re-scale the entire section of your piece, use the next option:

Once you right-click on any key signature at the timeline, you can choose another scale, into which all the tracks will be translated. This affects all notes of all tracks up to the next key signature (or the very end of the project), and updates the key signature, which may be useful for experiments.

This example shows rescaling, along with some undo/redo to see the difference: 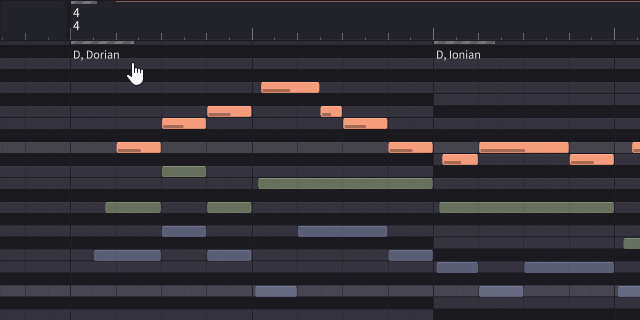 Arpeggiators submenu is available in the notes selection menu. If you have created any arpeggiators, you will also find a button on the right sidebar to apply one of them to selection.

The idea behind arpeggiators was to remember any custom sequence of notes in their in-scale keys, so that the sequence doesn’t depend on the scale anymore, and later apply that scale-agnostic sequence to some chords in whatever different harmonic context.

Arpeggiators is one of the unfinished parts of this app: there’s still no convenient way to edit or delete an arpeggiator, other than manually editing your arpeggiators.json in the documents directory. Hopefully this will be improved in future; as a workaround for editing arpeggiators, I’m maintaining a separate project just for arpeggiator sequences.